The Newcastle University experts also said women shouldn’t necessarily use their career as an excuse to delay motherhood – as working life doesn’t get easier with age.

And they questioned whether today’s couples are less willing to put up with financial hardship than previous generations.

Professor Mary Herbert, one of Britain’s leading reproductive biologists, said: ‘The most important message is for women to have their babies before the clock strikes 12.

‘I would be getting worried about my daughter if she hadn’t had a child by 35.’

The stark message, delivered at the British Science Festival comes as growing numbers of women wait to start a family.

Nearly half of all babies are now born to women aged 30 and older and the number of children born to women in their late 30s has almost trebled in recent years.

Britain’s biggest science conference heard that while some women will be lucky enough to become pregnant in their 40s or 50s, many face heartbreak.

Fertility also falls sharply after the age of 35 and IVF far from guarantees a couple a child.

Those who do fall pregnant, face greater health risks than younger women – as do their unborn babies.

Older mothers are more likely to miscarry, as well as have complicated pregnancies and deliver babies that are underweight or premature.

Stillbirths are more than twice as common in over 35s than younger women, while deterioration of their eggs with time also leaves them at greater risk of having babies with Down’s syndrome and other genetic disorders.

Finally, their age makes them more prone to arthritis, depression, cancer and heart attacks as they bring up their children. 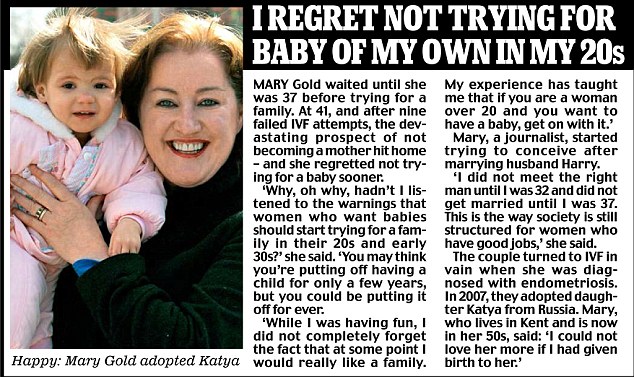 Professor Judith Rankin, who specialises in the health of mothers and their children, said: ‘The big message is that I don’t think women understand the risks.’

Jane Stewart, an IVF doctor at the Newcastle Fertility Centre, said that although the message isn’t new, not enough women are aware of it.

She said that family planning should involve planning as well as contraception.

‘We all plan families now, use contraception.  Family planning is often seen as a way of avoiding teenage pregnancies, avoiding people being pregnant when they don’t want to be because it doesn’t fit in with their life or social life or whatever else.

‘But family planning has to include when you are going to have your children as well.’

Dr Stewart said that if women are not made aware of the risks of delaying motherhood, they may later bitterly regret their decision.